Have you taken the Ctrl Alt Right Delete reader survey yet? It only takes a minute. You have opinions, I want to hear them. Everybody wins!

You’ve probably heard about right wing pundit/right wing internet superstar Tomi Lahren’s fall from grace. While a guest on “The View,” Lahren declared herself to be pro-choice. Her employer, Glenn Beck’s The Blaze, immediately suspended and quickly fired Lahren for her remarks. Currently, she’s making news not for her political opinions but for trying to retain her official Facebook page as part of her severance package. 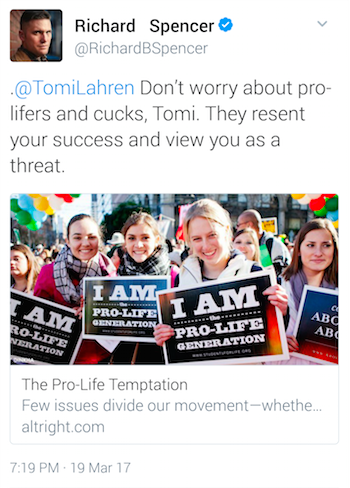 What you might not know is that America’s most punchable neo-Nazi — Richard Spencer — came to Lahren’s defense. While Lahren’s suspension was making headlines, Spencer tweeted his support at her and linked to an article on his site advising the frog squad not to fall for the “pro-life temptation”. (Click to read at your own risk.) The article, which Spencer did not write, says that while it’s tempting to support anti-choice positions to reflexively oppose the feminist position, abortion ultimately benefits the frog squad’s goal of white supremacy. Basically, it lays out every right wing myth about abortion and racism you’ve heard from anti-choicers, owns each one, and encourages the so-called alt-right to embrace reproductive freedom for all of those reasons. A few anti-choice news sites and blogs denounced Spencer (again, click at your own risk) but right wing media-at-large ignored both Spencer’s support of Lahren and the so-called alt-right’s semi-official view on abortion.

But with the rise of Donald Trump—and his spectrum-bending brand of populist nationalism—many longtime Republicans are now struggling to figure out where they fit in this fast-shifting philosophical landscape. In recent weeks, two prominent Republicans have told me they are sincerely struggling to explain where they fall on the ideological spectrum these days. It’s not that they’ve changed their beliefs; it’s that the old taxonomy has become incoherent.

For example, does being an outspoken Trump critic make you a “moderate” RINO? Does it matter whether you’re criticizing him for an overly austere healthcare bill, or for a reckless infrastructure spending plan? And who owns the “far right” now—is it “constitutional conservatives” like Ted Cruz, or “alt-right” white supremacists like Richard Spencer?

Dylan Matthews at Vox also breaks down some of the differences between Paul Ryan’s Randian view of Republicanism and the so-called alt-right:

Insofar as the alt-right, and the Trump-supporting right more generally, have a coherent economic agenda, it’s a vehement rejection of the free market ideology crucial to post–World War II American conservatism. While Paul Ryan reportedly makes all his interns read Atlas Shrugged, figures like Cernovich, Spencer, and Derbyshire are trying to build an American right where race and identity are more central and laissez-faire economics is ignored or actively avoided.

This has been most obvious on immigration and trade, where libertarians’ opposition to most or any government restrictions is in tension with the alt-right’s economic nationalism. But it’s also true on health care, where the pure alt-righters are joined by more mainstream pro-Trump voices like Ruddy and Buckley and even some Trump-wary conservatives such as Peggy Noonan.

I’ve written before about how Trump supporters online were completely disengaged as Obamacare repeal was being debated in Congress. Instead, they spent their energy supporting far right candidates in European countries. My broad observation is that if isn’t connected to Trump personally, white nationalism, or breaking things, they’re not interested. If Trump’s base at large have the same priorities as his most vocal supporters online, that gives him a lot of leeway to ignore the GOP’s standard laundry list of issues. Meanwhile, it’s obvious why the so-called alt-right are more open to things like universal basic income and single payer healthcare. As The Establishment’s Sheri Berman pointed out this week, authoritarian governments generally have a robust social welfare program as part of their agenda, and the frog squad’s politics favor authoritarianism.

This has the potential to be a huge problem for Republicans in congress. By now, they must sense that their dreams of a right wing legislative bonanza aren’t going to come true. It’s particularly interesting this week, when McConnell just killed the filibuster to ensure Neil Gorsuch is confirmed to the Supreme Court. As Greg Sargent notes, Republicans, who can’t find consensus amongst themselves, potentially have more to fear from this change than Democrats in Congress do. Meanwhile, thanks to unprecedented activism from their constituents, they’re feeling constant pressure for every vote they do take.

Even the Friday night airstrikes on Syria, where Republicans would usually line up behind a Republican president without hesitation, showed a deep division. Trump supporters online lost their minds at what was widely perceived as a pro-globalist move, and Trump’s influential surrogates spoke out against the action almost immediately.

I don’t see how Republican electeds square this circle. It’s a gaping vulnerability in their coalition. For our sake, let’s hope their civil war continues and we see more debacles like the Obamacare repeal play out. The more energy and resources they put into destroying one another, the less they’ll have to accomplish anything with legislation. Potentially, that cuts down the number of fronts we need to fight on.

I wrote a piece for Refinery29 about George Takei, fake news made and April Fools’ Day.

Thank you and credit to Nicole Belle who copy edits this newsletter each week. Until next week!