I’m still on medical leave but pleased to report that my surgery went well and my recovery is going nicely. This week’s edition is edited by Political Research Associates. I’m a big fan of what they do and I’m excited for them to share their work with you.

For 35 years, Political Research Associates (PRA) has been on a mission to challenge the Right and advance social justice. We expose movements, institutions, and ideologies that undermine human rights. Coinciding with Trump’s first 100 days in Office, PRA compiled a crash course of readings, videos, and tools to inform our collective resistance based on principles for engaging the regime, defending human rights, and preventing authoritarianism. Below you will find a selection we picked out just for Ctrl Alt Right Delete readers.

Join the movement’s leading fight-the-right think tank. PRA is on Twitter @PRAEyesRight and Facebook. PRA’s quarterly magazine has been the gold standard for researchers, activists, academics, and all others concerned with how the Right is influencing our daily lives. Subscribe here and you’ll receive the Spring 2017 issue.

The Origins and Ideology of the Alternative Right

The Alt Right helped Donald Trump get elected president, and Trump’s campaign put the Alt Right in the news. But the movement was active well before Trump announced his candidacy, and its relationship with Trump has been more complex and more qualified than many critics realize. The Alt Right is just one of multiple dangerous forces associated with Trump, but it’s the one that has attracted the greatest notoriety. However, it’s not accurate to argue, as many critics have, that “Alt Right” is just a deceptive code-phrase meant to hide the movement’s White supremacist or neonazi politics. This is a movement with its own story, and for those concerned about the seemingly sudden resurgence of far-right politics in the United States, it is a story worth exploring.

The Alt Right, short for “alternative right,” is a loosely organized far-right movement that shares a contempt for both liberal multiculturalism and mainstream conservatism; a belief that some people are inherently superior to others; a strong internet presence and embrace of specific elements of online culture; and a self-presentation as being new, hip, and irreverent. Based primarily in the United States, Alt Right ideology combines White nationalism, misogyny, antisemitism, and authoritarianism in various forms and in political styles ranging from intellectual argument to violent invective. White nationalism constitutes the movement’s center of gravity, but some Alt Rightists are more focused on reasserting male dominance or other forms of elitism rather than race. The Alt Right has little in the way of formal organization, but has used internet memes effectively to gain visibility, rally supporters, and target opponents. Most Alt Rightists have rallied behind Trump’s presidential bid, yet as a rule Alt Rightists regard the existing political system as hopeless and call for replacing the United States with one or more racially defined homelands.

This article originally appeared in Crash Course, Week One

The Christian Right on the Gender Frontier

Dr. Paul McHugh, professor of psychiatry at Johns Hopkins University (and former director of the school’s Department of Psychiatry as well as the psychiatrist-in-chief at the Johns Hopkins Hospital), has positioned himself as a go-to source for right-wing Christian organizations when it comes to anti-transgender campaigns. His title and affiliation with a reputable university has been used to bolster the Christian Right’s argument—that biological sex is binary and immutable (thus erasing intersex and transgender realities)—and provide a pathway for their ideologies, cloaked in scientific disguise, to reach the secular and political mainstream. Paul McHugh’s recommendations around transgender healthcare run counter to those made by the American Medical Association, the American Psychological Association, the American Psychiatric Society, and the American Academy of Pediatrics, among others.

As PRA researcher Cole Parke noted in their October 2016 Public Eye article on the anti-trans strategy of the Christian Right, McHugh has actively worked against the medical treatment of trans people since the 1970s. In an essay published in The American Scholar, McHugh indicates that part of his incentive for taking over Johns Hopkins’ psychiatry department was to shut down the institution’s Gender Identity Clinic, which had been at the forefront of transgender medicine since 1966.

McHugh has continued to be a prominent voice for anti-trans policies and practices. When the Family Research Council (FRC) laid out its five-point plan for “responding to the transgender movement” in 2015, they included statements made by Paul McHugh to support their argument against providing trans people with gender-affirming healthcare, access to gender transition procedures (often understood to be life-saving for transgender people), legal recognition, protection from discrimination, and the right to serve in the military.

McHugh also has a platform as member of the American College of Pediatricians (ACP), a small right-wing breakaway group that split from the American Academy of Pediatrics in 2002 and was later called a hate group by the Southern Poverty Law Center in 2012. McHugh co-authored an ACP position statement last year (updated most recently in January 2017) called “Gender Ideology Harms Children.” It urges “healthcare professionals, educators and legislators to reject all policies that condition children to accept as normal a life of chemical and surgical impersonation of the opposite sex.”

While McHugh’s work is cited as fact by the Christian Right, his own sources are questionable. Among McHugh’s primary sources for the ACP position paper is Sheila Jeffreys, a feminist scholar with no medical background. She is also notably among a small group of highly controversial anti-trans academics and activists described by their critics as “Trans-Exclusionary Radical Feminists” (TERFs). The collusion between the Christian Right and anti-trans feminists demonstrates that anti-trans medical professionals such as McHugh draw from any material that furthers their political agenda, regardless of its credibility.

McHugh’s work has continued to be deployed as factual evidence on both the local and statelevels in opposition to trans-affirming legislation. He even admitted that his 2016 non-peer-reviewed report on sexuality and gender—published in The New Atlantis, a right-wing journal—was merely an “opinion piece.”

The Human Rights Campaign recently drilled down on this failure to engage in rigorous peer review as part of a new website called “McHugh Exposed,” launched just ahead of the Earth Day “March for Science” in April 2017. This comes on the heels of McHugh jointly filing an amicus briefto the Supreme Court opposing Virginia trans student Gavin Grimm in his case regarding access to the restroom appropriate to his gender identity. In March 2017, the Supreme Court reversed its decision to hear the case, and vacated a lower court’s ruling in favor of Grimm. How Title IX protections extend to trans students remains open to interpretation.

McHugh’s arguments are in direct opposition to that of the 66,000-member American Academy of Pediatrics, which put out a statement in March 2017 stating that “policies excluding transgender youth from facilities consistent with their gender identity have detrimental effects on their physical and mental health, safety and well-being….Transgender children should be supported, nurtured and cared for, whether in their homes, in their schools or through policies enacted at the state and federal levels.”

Since McHugh’s New Atlantis report was published last fall, almost 700 members of the Johns Hopkins medical community—including individuals from the university’s schools of Medicine, Nursing, and Public Health—have publicly called on Johns Hopkins to disavow what they call his “False LGBT Reports.”

The petition states that McHugh not only fails to uphold Johns Hopkins’ values of justice and scientific rigor, but also that he “has been on a misguided crusade against LGBT patients and communities,” which is “causing significant harm to LGBT communities within Hopkins and beyond.”

The Christian Right frequently calls upon scientists and medical professionals on their roster to provide expert witness in the fight against LGBTQ and reproductive justice. Paul McHugh is a prominent one, with over four decades of practice advocating against trans-affirming healthcare.

This article originally appeared this week in the Eyes Right blog

What to do when you are smeared by Right-Wing demagogues and a collection of other useful tools for organizers. 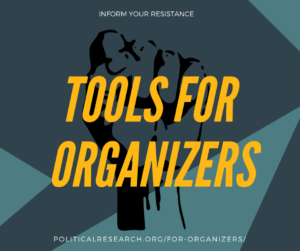